The Innovation for Childhood Foundation has as its main goal to spread, promote and foster the technological innovation and the environmental awareness among children.

From the functional point of view, the organization in the children centre is planned according to the pedagogic devolpment for them, so the building is distributed according to the specific children demands in their different age stages. The building is thought to embed the architecture not as a mere structure, but as an emotional asset to their education. The instruction is to create spaces and opportunities to enhance their creativity. The building intends to convey feelings so much from the inside and outside, to create different spaces which boost curiosity and draw the children's attention.

The colour and material are protagonists in the project, they stimulate and provide the atmosphere with freshness. Natucer has contributed to achieve this effect as the ceramics used on the walls have been manufactured there.

The round shapes, the curves are attractive, they invite us to explore and approach them softly. Tangent facings with no edges seek for safety among children.

From the ecologic point of view, the project seeks for leaving the minimum environmental and carbon impact and the choice made on the materials for the facade favours this initiative due to the features of the materials and the manufacturing proximity.

The whole building consists of 5 cylinder blocks with serene facades with colourful wall tiles; each block presents a different colour with 4 tones, all of them coloured with dispersible dyes to achieve the demanded tones. This way, thanks to the different tones displayed, a great depth in the piece is achieved which provides the desired visual movement of the whole set of buildings depending on the ambiental light.

This facade enclosure consists of porcelain straight wall tiles with format 13.5x55cm and curved pieces 13.5cm width and 85cm bending radius to make the upper and lower curves. They have been laid over guiding rails with foil clamps. The assembly was made with rails on the ceramic pieces made in situ and the guiding rails were laid over a foil panel sandwich type and mineral wool which holds a metal structure with uprights and belts.

Natucer has been awarded in the latest Covering Show for the manufacturing of the material used in the Innovation Centre for Childhood designed by Ana García Sala located in the Technological park in Paterna. 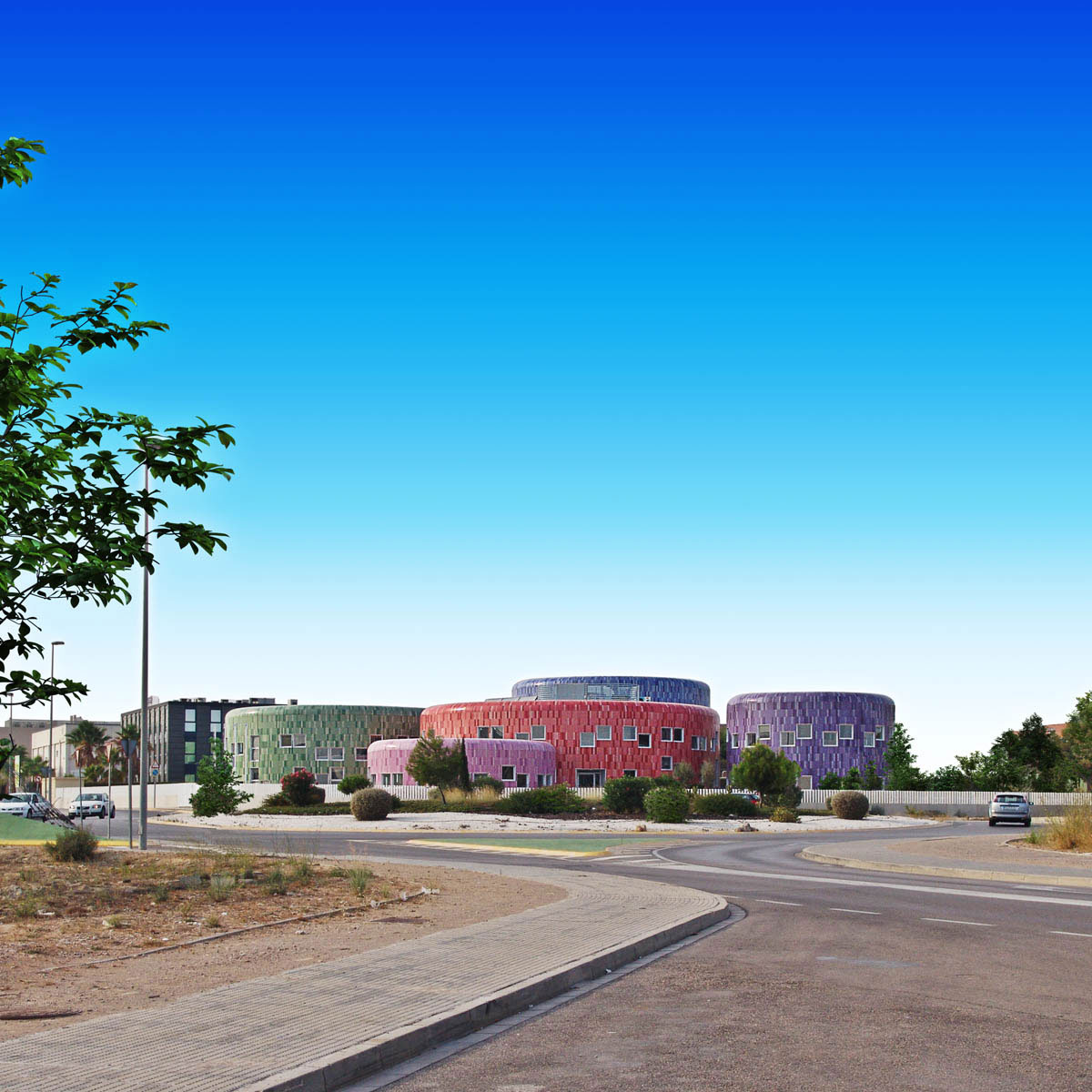 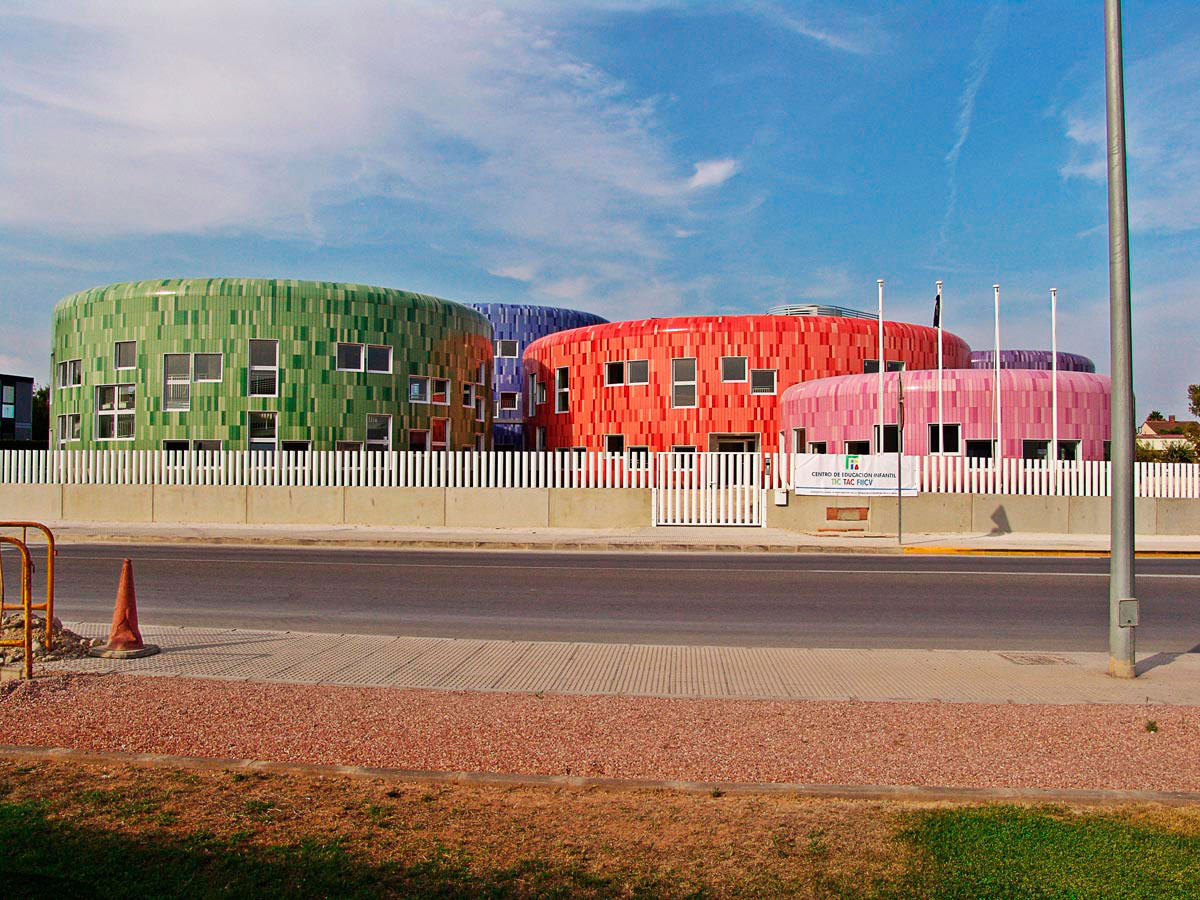 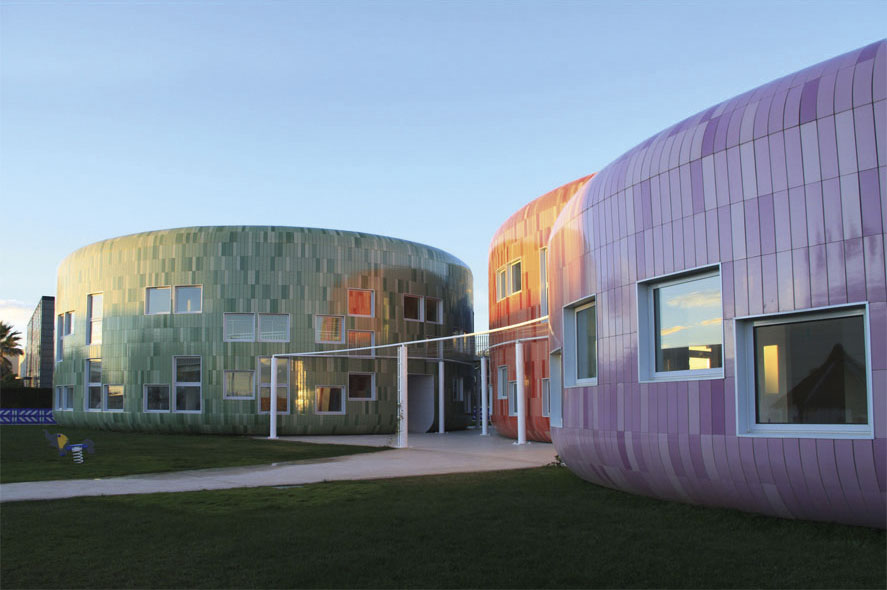 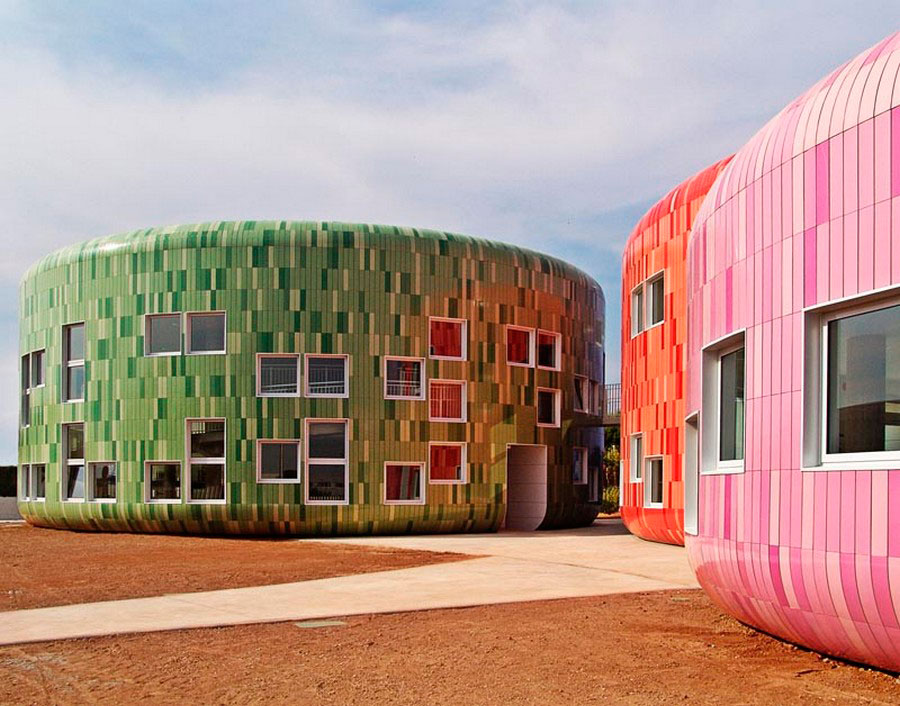 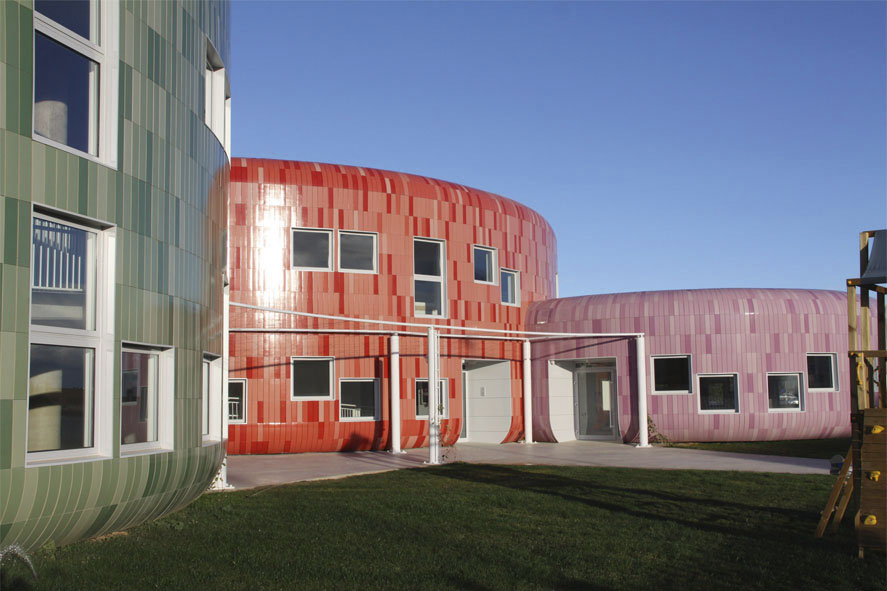 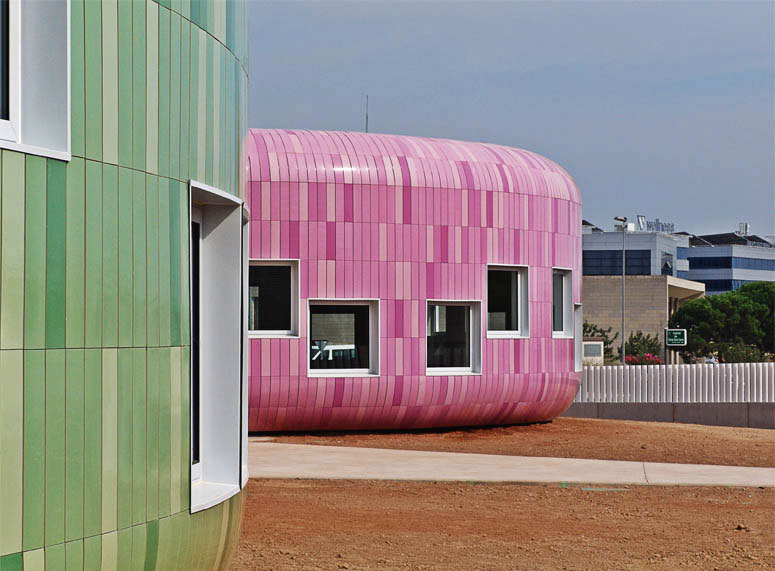 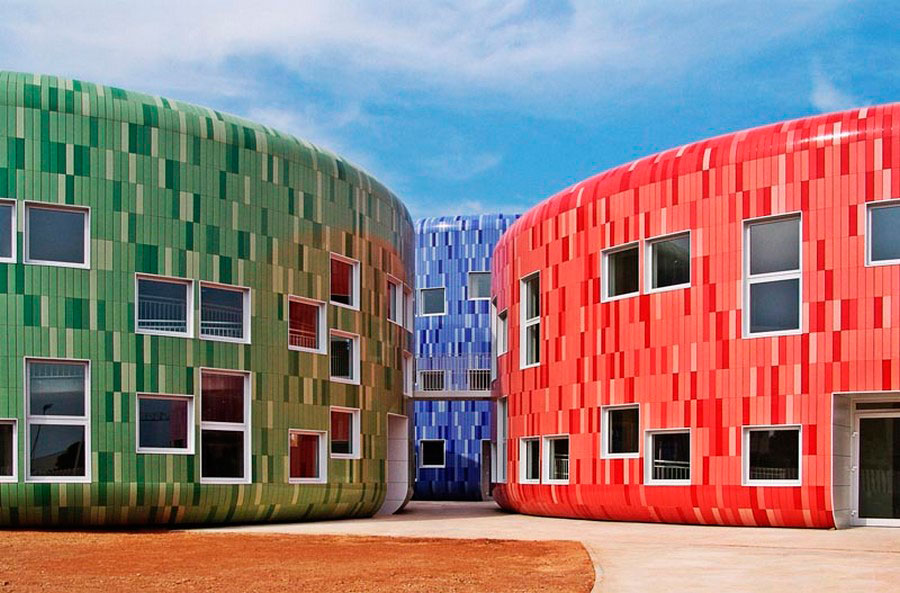 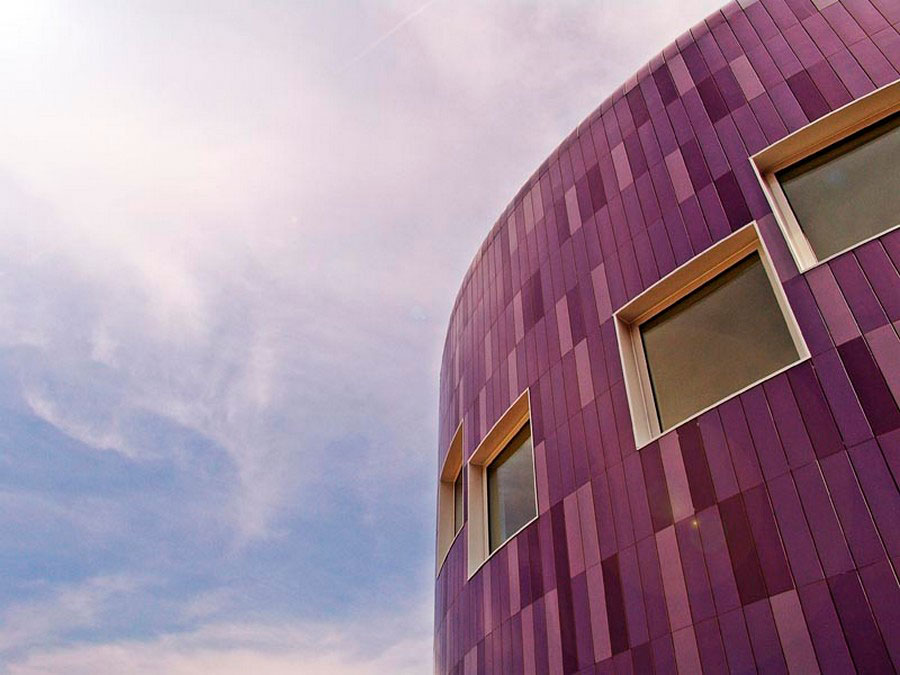 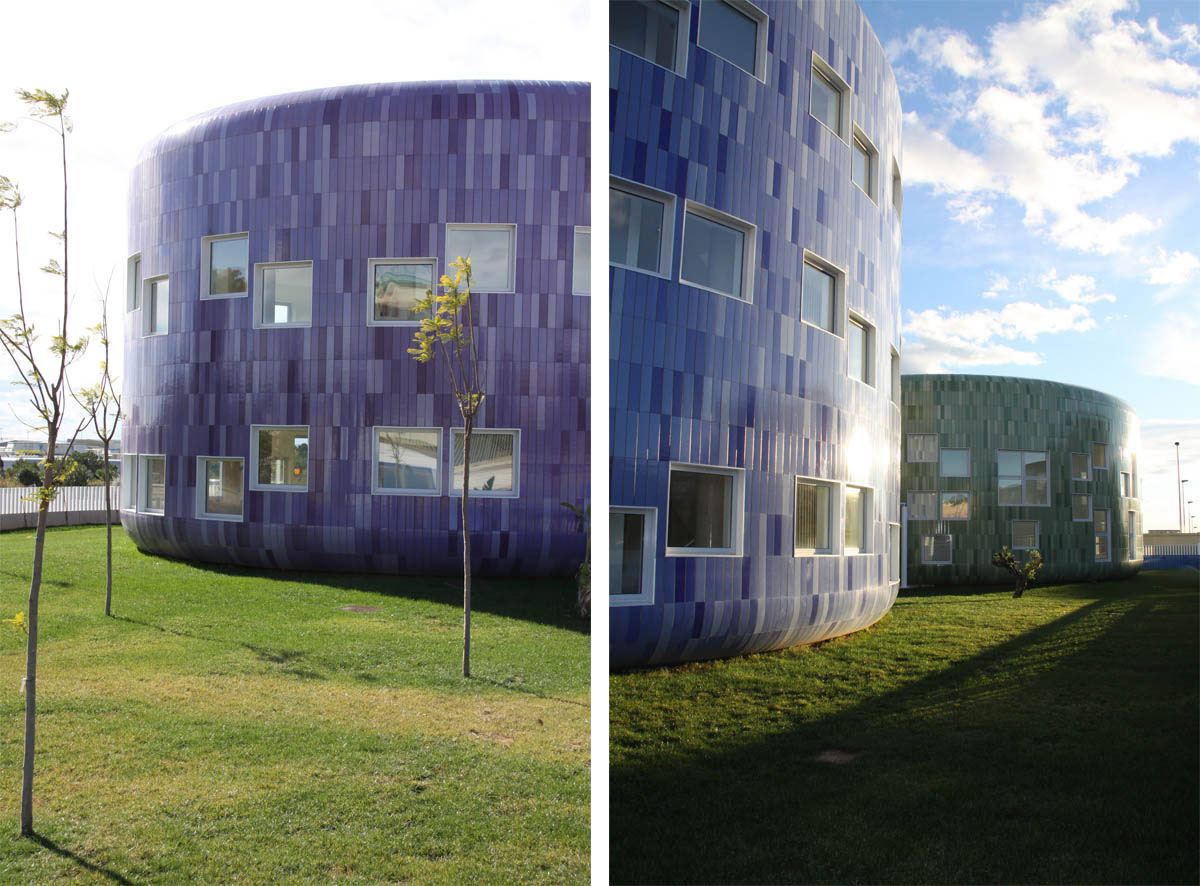 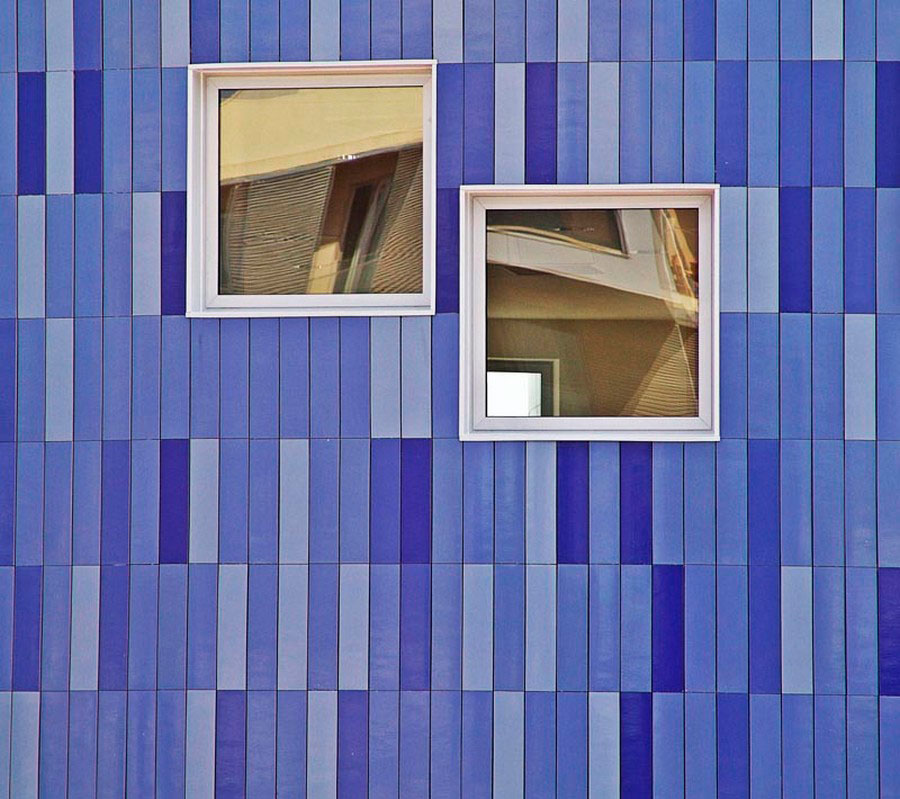 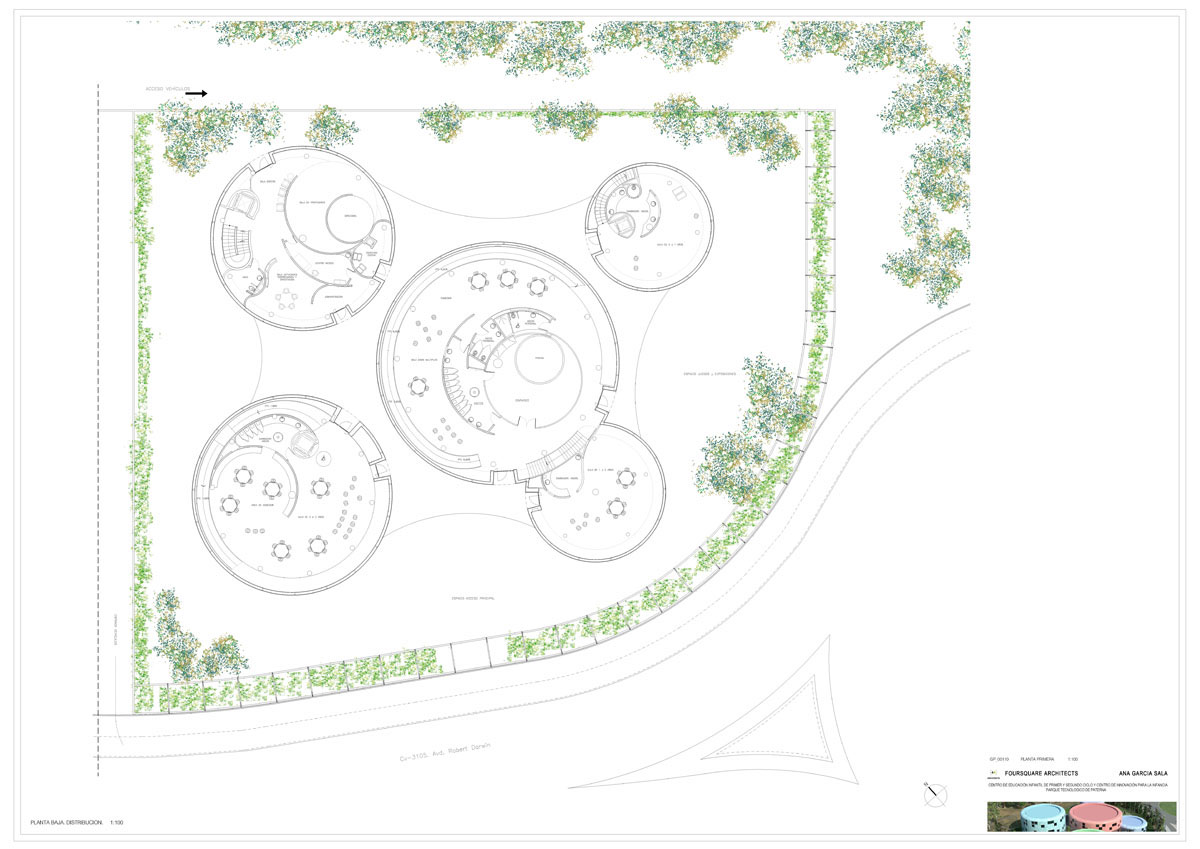 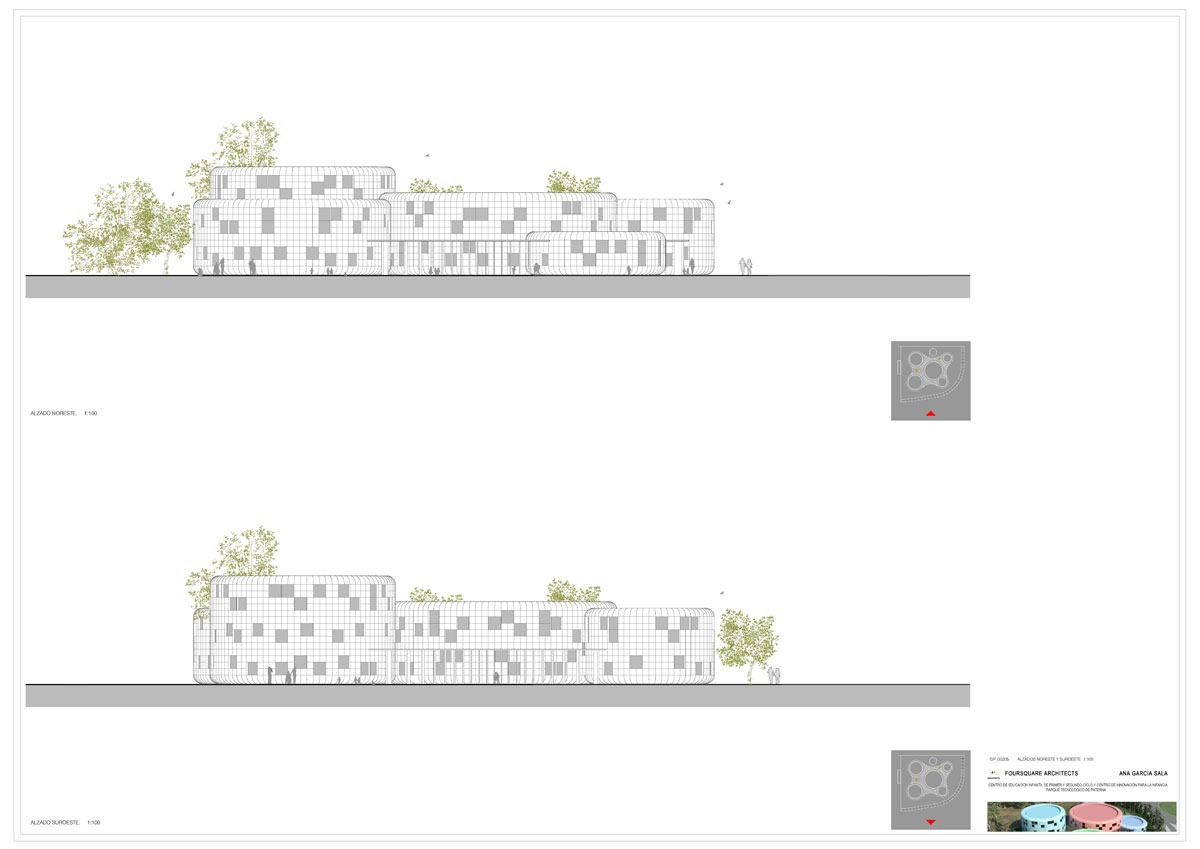 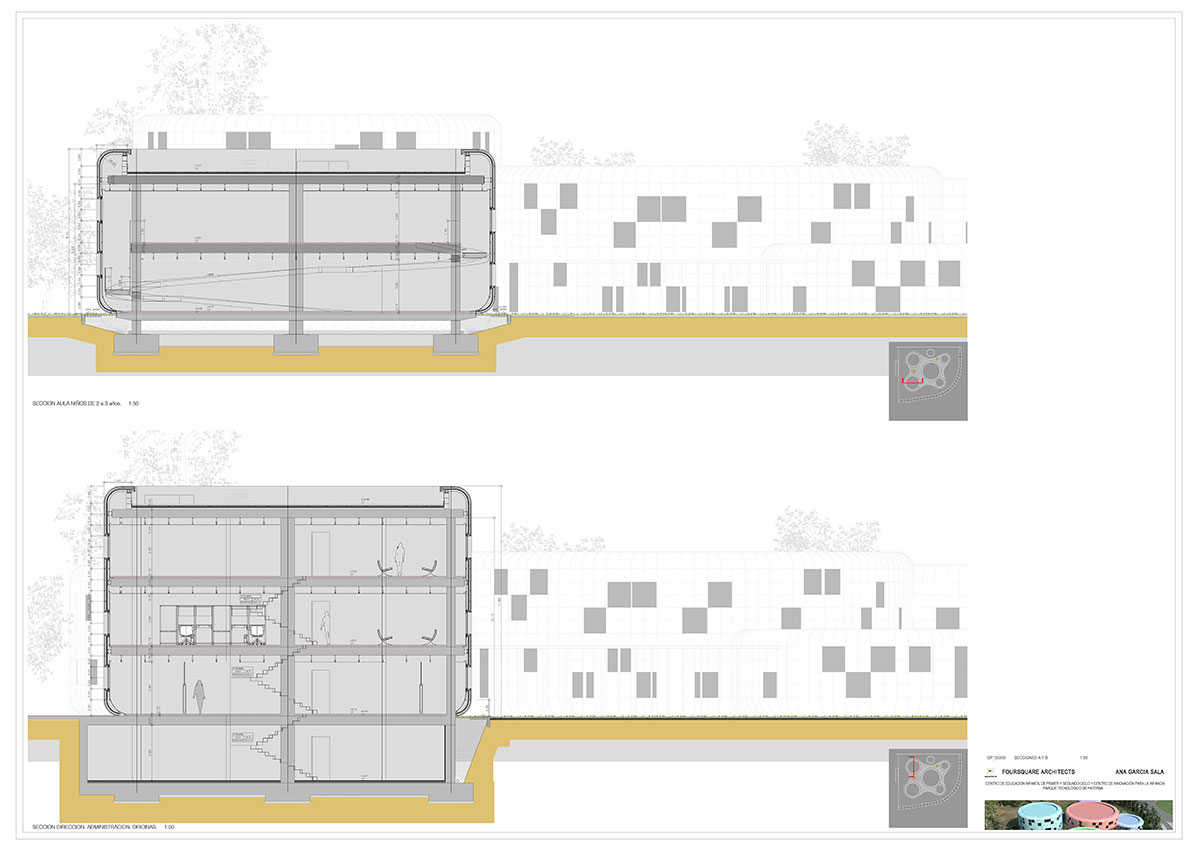 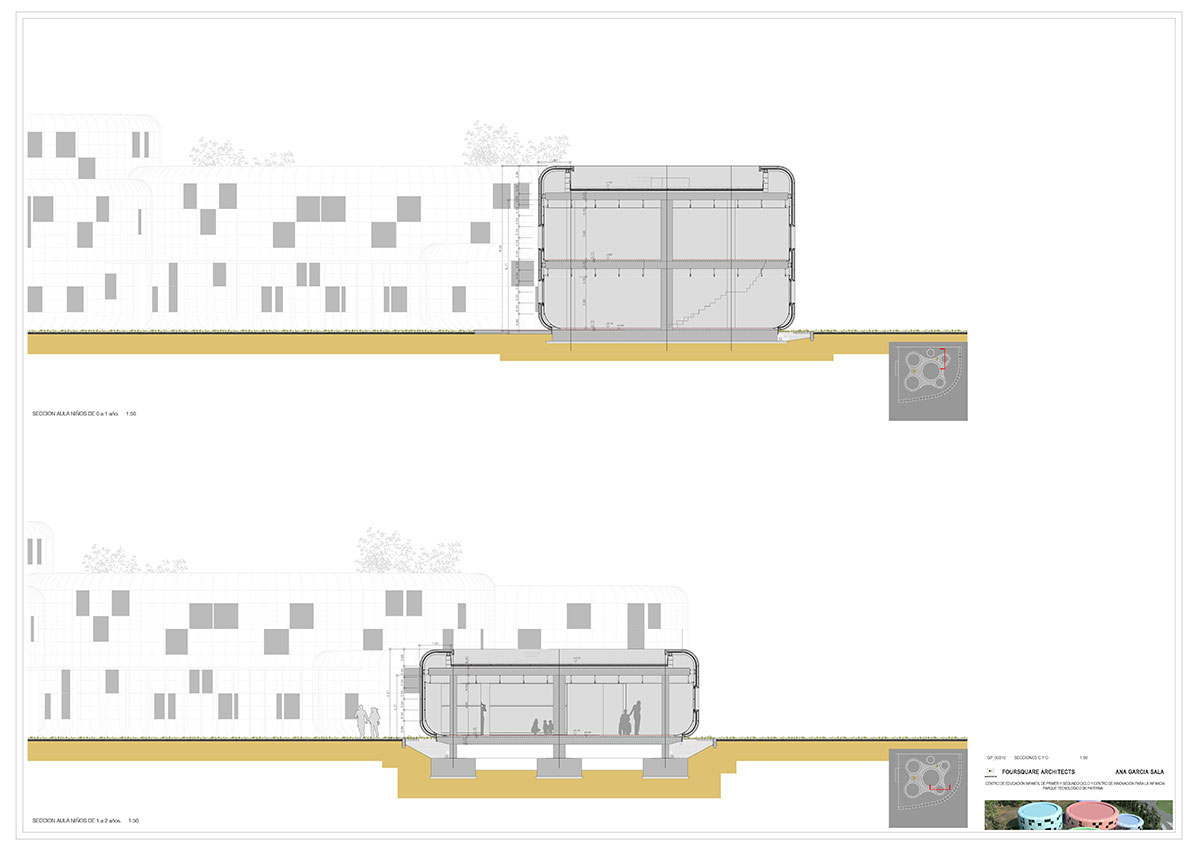 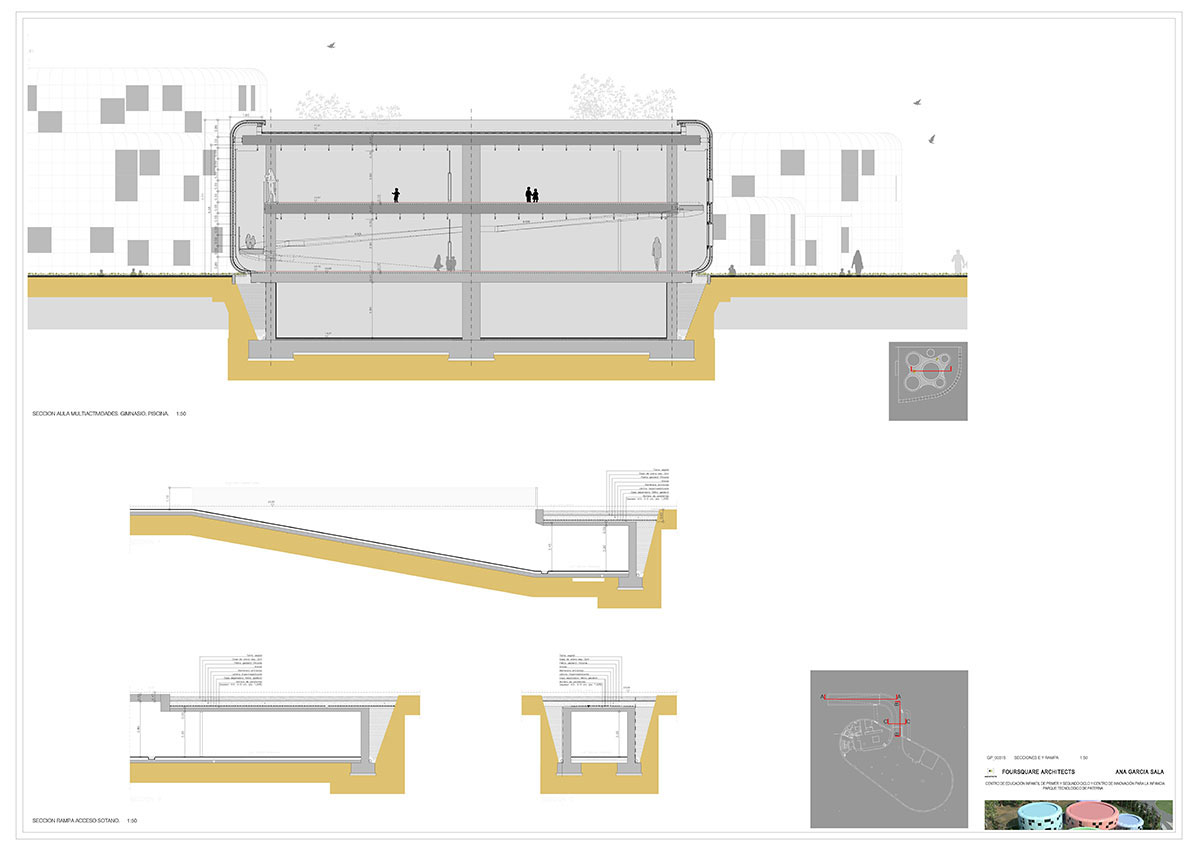 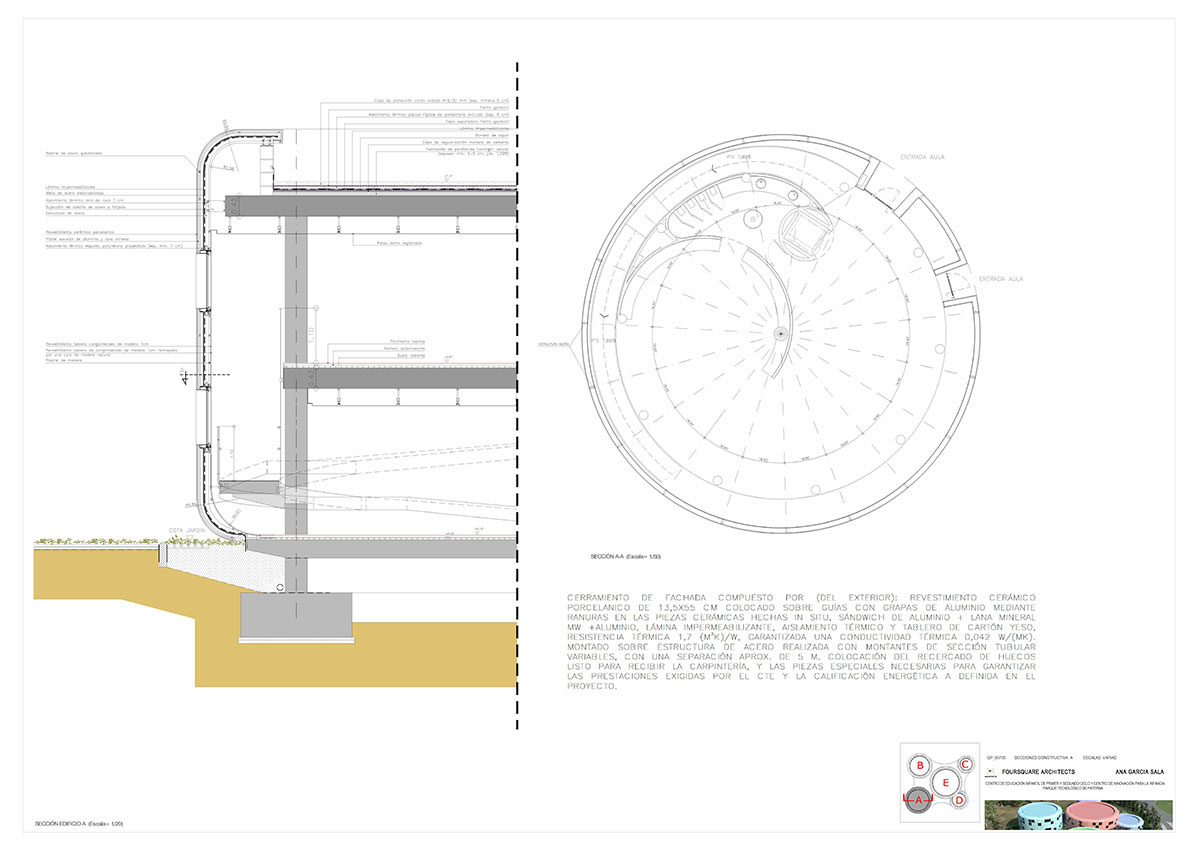