Natucer started out by the end of the 90´s, matching up with the Spanish technological revolution and the producction of pressed wall tiles through quick fire.

In its founding moment, the quick firing technology was questioned to be able to substitute the over 24 hours firing technology existing in the extruded ceramics field those days. It was not going to be easy to Natucer as there were no former records in Spain about it, but thanks to ITC (Ceramics Technology Institute) we got down to work and achieved a 1400sqm a day production of unglazed products.

Our next step consisted of investing in Research and Development, creating within the company our own developing lab, its building concluded in 1992. Thanks to the above mentioned lab, new clay formulae were born and led us to achieve lower firing times and hence, increase our production up to 3000sqm a day. In 1996 we increased our staff and our production capacity. That year, Outdoor ice-resistant glazed floor tiles were created.

In 1997, we started to produce the extruded ceramic wall tiles and at the same time, as a result of our Research and Development dedication, Natucer launched the first extruded brightness surface wall tiles to the market. Such products presentation was held at CEVISAMA'98.

Some years later in 1999, Natucer introduces an new manufacturing system with the rotocolour technology, with seven heads, which allows the extruded parts to be decorated with serigraphy. This let us to position ourselves in an avant-grade segment of the world's ceramic market. These products were presented for the first time in CEVISAMA 2000.

Over the course of 2000, following on technical novelties, we developed a new outdoor ceramic floor tile called "FilterFloor" which prevents from water blockage problems allowing it to disappear naturally.

Both outdoor and indoor extruded porcelain floor tiles were also developed in the year 2007.

During 2010 and 2011, Natucer's challenge was to introduce the ceramic digital printing in its production system.

In year 2015, Natucer was awarded with the "Alfa de Oro" in CEVISAMA for the development of several ceramic pieces embedded in urban areas and some customized projects.

Our company philosophy is based firstly, on tendency creation in terms of ceramic design; and secondly, based on the wide range of special and complementary pieces which are difficult to reach by means of the current pressing technique in nowadays ceramics field. Therefore, our state-of-the-art design in ceramic decoration, provides our final users with the possibility of customizing their own ceramic ambient. Such philosophy has led us to highly position our brand, being acknowledged and awarded by several organizations. 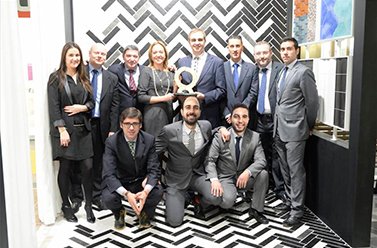 Natucer was awarded with the "Alfa de Oro" in CEVISAMA 2015 for the development of several ceramic pieces embedded in urban areas and some customized projects. The latter ones, allow us to open new applicable fields with high added value in ceramics.

Quality award in 2011, granted by Periódico Mediterráneo for the premium quality of our products.

In CEVISAMA 2010, for a new three-dimensional pieces design Life Arq.

In 2004, NATUCER, S.L. receives the PYME 2004 award for our Entrepreneurial Excellence.

In 2002, we were nominees in the VII edition of Prince Felipe Awards for Entrepreneurial Excellence among the Technological Innovation and Entrepreneurial Competitivity candidates.

In 2002, NATUCER, S.L. won the PYME Export award given by "Cámara de Comercio" in Castellón.

NATUCER, S.L. was selected finalist in 2001 by NOVA awards for the best company in Comunidad Valenciana.

Alfa de Oro in 1998 for the development of special pieces in relief for a wide range of decorative wall tiles choice and extruded Brightness surface wall tiles.

Alfa de Oro in 1993 for the innovation in extruded and complementary extruded special pieces decorated for wall tiles.